In second grade, John built a guitar out of a cigar box and picture hanging wire for a science fair project. The guitar had pipe-cleaner sound waves emitting from the sound hole and sounded like a tank, but this began John's love affair with the guitar!

After 5th grade, John's Dad bought him a guitar and a lesson, and from there John focused on his Mel Bay Guitar Method books.  He learned the Marines theme song for his Grandfather who had requested the Army theme song but the Halls of Montezuma was all John could find in Mel Bay. John honed his skills in church, talent shows, bands, and as a solo artist in clubs and concerts. At one point, he even did an impersonation of Cat Stevens!

Since then John has performed all over, bringing a confident presence and musical joy to countless stages. He has also been a Music Director and Worship Leader in many churches for 50 years.

Enjoy a few of John's songs included on his YouTube channel at https://www.youtube.com/channel/UCb4tHyJ1bB6_HQdyjNgjeQA

A Mr. Checkers Magic show will delight any audience! There's nothing like the sound of  laughter along with amazing illusions!

ART's Diner! Where every meal's a masterpiece!

To Listen to some of John's original music, visit his YouTube page at 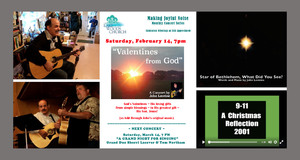 John writes and performs original music. Check it out.